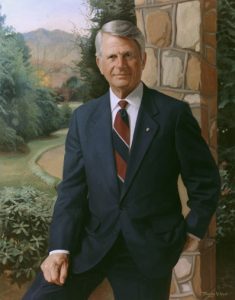 Zell Miller was born in Young Harris, Georgia on February 24, 1932. His father passed away when he was just seventeen days old. His widowed mother raised her son and daughter alone. She built a home for herself and her children with rocks she hauled from a nearby creek. Zell lived in that Rock House his entire life, never forgetting where he came from.

Zell graduated from Young Harris College and afterwards spent three years in the United States Marine Corps where he attained the rank of sergeant. Following his military service, he attended and ultimately graduated from the University of Georgia.

Zell served as the 79th Governor of Georgia from 1991-1999. As Governor, he developed a plan to create a statewide lottery exclusively for the purpose of funding his primary education initiatives: the HOPE Scholarship and Georgia’s Pre-Kindergarten program.

In 2000, Zell was appointed to the United States Senate by then Governor Roy Barnes to fill an unexpected vacancy created by the death of U.S. Senator Paul Coverdell. Zell was later elected to serve the remaining four years of that term. He chose not to seek reelection and retired from the U.S. Senate in January 2005.

Chairperson of the Board of Trustees

Court of Appeals of Georgia